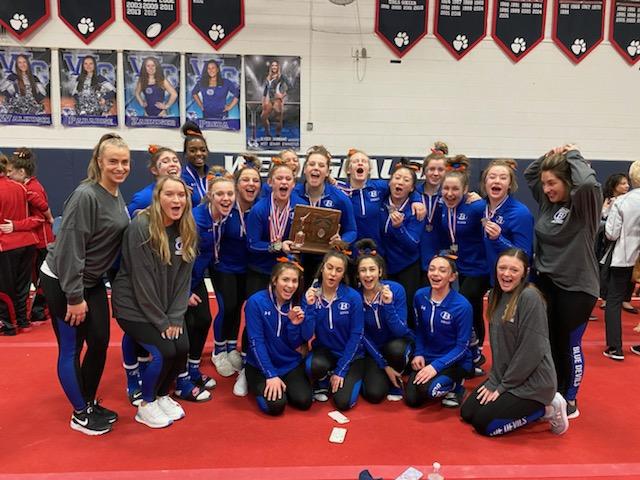 For the first time since 2016, The Blue Devils Varsity Gymnastics Team qualified for the State Championship in a BIG away! The girls were District Runner Ups for the first time in recent history.

Next, we competed on Vault. The line up went 6 for 6, with everyone hitting a solid Vault. Sophia Tomecko, Lilijana Kotar, Lana Dakdouk, and Jordyn Thomas contributed to the team score. KaraBeth Nemet and Emma Gray also nailed their vaults to round out the line up. Jordyn Thomas placed 2nd Individually, tying her School Record.

After the lunch break we went to Bars and the girls went 6 for 6 and looked clean and confident. The top four scores were Sophia Tomecko, Lilijana Kotar, Alexis Clark, and Jordyn Thomas. Lexie Barton and Alaina Timko also hit their bar routines adding to the depth in the line up. Jordyn Thomas placed 2nd individually, again beating the School Record, previously held by herself!

We finished the day on Beam. The girls held off the nerves to hit some nice routines to finish up the meet. Top four Team Contributors were KaraBeth Nemet, Emma Gray, Lilijana Kotar, and Jordyn Thomas. Jordyn Thomas shattered the School Record, previously held by herself, with a 9.675 and was named District Champion on Beam.

Jordyn Thomas also hit a new All Around Record, previously held by herself, with a 38.25, earning her the title of District All Around Champion for the first time in her career.