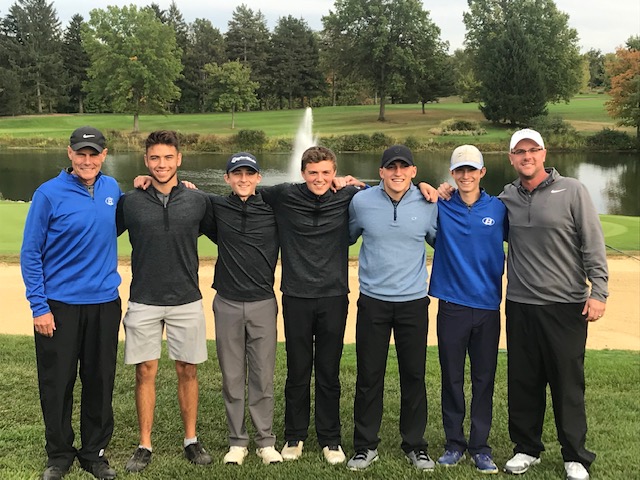 The Blue Devils boys golf team is headed back to the state tournament for the second time in the past three seasons. The team fired a season-low 308 on Monday and placed fourth at the brutally tough Pine Hills District. Brunswick had many clutch performances on the afternoon, but perhaps none as clutch as freshman Max Heilbrun shooting a season-low 78 in the biggest event of his career. Max was a steady one over par heading into the par five 7th hole where he almost hit the green in two, getting up and down for his first birdie of the day. He preceded to stick his iron to three feet on the par three 8th, making another birdie on his way to a front nine 36. He played steady on the back and finished with a 42. Heilbrun was T34 on the day, and was the 5th lowest freshman in the field. Leading the scoring for the Blue Devils was Clay Grenier, who shot even par on the front nine after making 3 birdies (holes 3, 5, and 7) to go with a tough triple bogey on the par 4 sixth. Greiner made three spectacular pars on holes 10-12 and came home with just two bogies on the back to total a two over par 73 that was good for T8 finish individually. Alex Heilbrun had a rough front nine (43), but did have a brilliant chip in birdie on the par 4 3rd. He caught fire on the back nine, making a bomb for birdie on hole 11, and capped off his round with birdies on 15 and 17. He shot a back nine 35. Chase Safko matched his lowest round of the season as well, shooting a 79 that included a sweet birdie on the par 3 fourth, where he hit his tee shot to 8 feet. Chase also birdied the 13th hole. Cody Merrill rounded out the Blue Devil scoring with a 96. The Blue Devils shot their second lowest district score in school history, behind only the 2017 team. Brunswick will travel to the OHSAA State Tournament on October 18 – 19 at the OSU Scarlet Course. Great job boys!